Back to SNATCH EXERCISES

The barbell snatch is an Olympic exercise that has been successfully established in CrossFit and Olympic weightlifting in our time. Yet there are several types of that exercise namely snatch itself, so-called power snatch, and some other types of snatches. Let's enclose the difference and find out why do you need power snatch in your training schedule to achieve strength.

Snatch is a complex weightlifting exercise that is actively used by athletes of various disciplines. CrossFit athletes often use it to develop endurance and explosive strength. This is a basic exercise in which most of the muscles and joints work. The correct implementation of the technique must be taken very seriously. This exercise is considered highly traumatic so it is better to put attention to the technique and start your barbell snatch lifts under the guidance of a competent coach.

The power snatch is a subtype of a classic snatch and the difference between them is not as obvious as it seems. In general, the difference lies in several features of the catch position:

So to summarize it, a barbell power snatch is just a snatch done without a full-depth squat.

What is the main purpose athletes follow when they include power snatch in their WOD? Besides the whole purpose to weight high lifts in the principle of Olympic weightlifting, power snatch helps in achieving the following goals:

As for the complexity, as we mentioned below, both snatch and power snatch should be done under the thorough guidance of a coach not to harm the body instead train it. Yet if a snatch is a fundamental movement, power snatch is its modification that can be used for improving pulling and explosive skills in snatches as they are.

The most obvious difference between power snatch vs snatch could be also seen in our video examples below.

Even though the snatch is one of the two main movements established in Olympic weightlifting, weightlifters in competition use the classic snatch, not the power one. At the same time, the power snatch is also included in the mandatory training program of Olympic weightlifters, as an auxiliary exercise that allows you to effectively develop the execution technique, immediately extend the hips, knee ligaments, and feet to achieve impressive results when performing the classic snatch. In particular, the power snatch is also used to raise the barbell bar overhead faster because during this movement it takes a little less effort. But due to the fact that the athlete is not in a deep squat, the amplitude of the snatch movement is longer. As a result, the force impulse is also large, which then allows the Olympic weightlifters to raise the bar higher when performing the classic snatch.

For CrossFit routines, snatch vs power snatch is not a question as both these exercises are included in various CrossFit training programs as they allow an athlete to improve muscle condition and increase impulse of strength in a fast mode. In order to achieve success in the study of the barbell snatch and power snatch in CrossFit, CrossFit training programs suggest starting with minimal working weights and carefully working out the technique and mechanics of the snatch.

The Main Steps in Doing Snatch

First of all, let's discover the main stages an athlete passes when he is doing any type of snatch. These are as follows:

The beginning of any snatch is a pre-stretch. Since the exercise requires stretching the muscles, be sure to take time to stretch before performing the snatch. The greatest attention should be paid to stretching the quadriceps, biceps femoris, and adductors of the thigh. To do this, you can use the following simple exercises: transverse and longitudinal lunges, deep squats with a pause at the bottom point, deadlift on straight legs, tilts with a barbell on your shoulders, lunges with a pause at the bottom point. Use the well-known bridge exercise to properly stretch and prepare the abdominal muscles for work. A couple of hanging sets on the bar will also be extremely beneficial - the hypertonicity of the spinal extensors will go away, and the static tension of the hands and forearms will give you more control over the barbell when performing a snatch.

The following power snatch performance procedure will help you complete the exercise correctly. First of all, get in the right position. The starting position is of paramount importance because all the mechanics of movement begins from it. Next, we carry out the movements according to the plan.

Besides these guidelines, there are also some tips you should use to gain results in your CrossFit snatch workouts. To begin with, try to understand the whole mechanics of the process, which muscles are responsible for the fact that the bar ends up overhead as a result? Pay close attention to leg strength. For an athlete who makes a snatch, the impulse push comes not only from the muscles of the arms, back, and abs. First of all, this push is given by the legs. And remember that getting the snatch perfect the first time is mission impossible. Only persistent repetition, honing each movement, going from light to heavyweights will give you the result that you hope to get. In the end, a properly executed classic or power snatch will look like a real choreographic movement, mesmerizing and demonstrating your strength.

When to Use Snatch and Power Snatch

Both exercises are used in CrossFit and Olympic weightlifting. But if the snatch itself is an opportunity in the Olympic weightlift to achieve a 1RM result in the snatch and prepare for competitions directly in this sports discipline, then the power snatch is an auxiliary exercise that should be used in parallel with the snatch in order to improve its performance.

In CrossFit, both exercises are used equally in athlete training programs, and their use is determined by the goals you want to achieve during the workout.

The Sample of Training Plan with Snatch

Of course, if you want to include the snatch in your training program, it will take a thoughtful approach to make this exercise an effective part of the workout. At the same time, you should not forget about your general level of training, because for a beginner, it is simply impossible to follow the intensive programs of advanced athletes without risk to health. We provide examples for advanced weightlifters and beginners so that you can refer to them when compiling your training program and including power snatch in it. 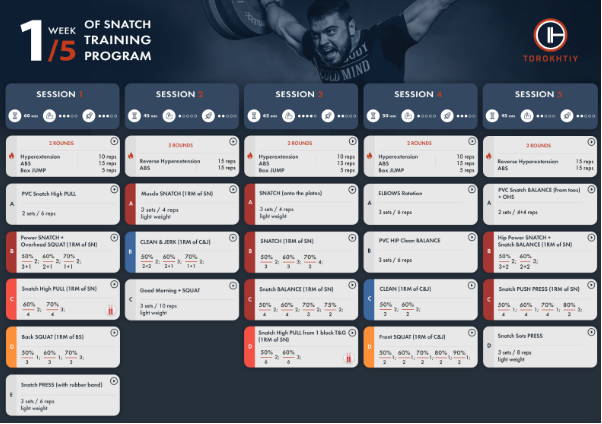 In this example, you can see in detail how to make effective 5 sessions per week using snatch and power snatch. This program is suitable for advanced athletes who want to improve their snatch performance through a consistent and thoughtful approach to their training.

Developing Snatch in 5 Weeks for Pros

The optimal snatch training program includes 5 weeks of consistent and intense training. At the same time, the program does not include only the practice of snatches. Of course, this is the main exercise to which the program is dedicated. But besides this, attention should be paid to:

Only with a balanced program with increasing load can one fully master the principles and technique of performing the snatch. An example of such an optimized program for advanced athletes is the Snatch Cycle. You can take it as a basis and then add snatches to your workout routine without fear that you will do something wrong.

How to Do Snatch When You Are Beginner

For beginners or those who want to learn more about the methodology and practice of snatches, special masterclasses can be used. For example, the Snatch Masterclass of 20 lessons, which includes hours of theory and practice, will help you understand the basics of Olympic Snatch weightlifting. Such a course will provide, first of all, a theoretical basis, and at the same time reinforce it with precise recommendations for the practical implementation of the exercise. This is the optimal course for functional fitness athletes and beginner Olympic weightlifters.

In any case, it is worth starting training only with a basic set of knowledge about the mechanics of snatches, under the supervision of a trainer, and only after you have previously paid attention to additional exercises, stretching, and warming up.

Classic and power snatches are one of the basic weightlifting exercises. They are used both in Olympic weightlifting programs and in CrossFit workouts, functional fitness. Despite the apparent simplicity of movement, the mechanics of snatches are quite complex. It involves several muscle groups at once and requires a thoughtful approach at each stage of the exercise. What's more, snatches can be inherently traumatic if you do them with the wrong form, no precise weight control, or the wrong warm-up. Therefore, it is very important to master the theory before performing this type of strength exercise, to reinforce it with practice on individual exercises that are important for a full-fledged lifting of the barbell in the snatch technique.